1. What’s your hidden talent?
I play the piano (reasonably well – though not often in public), I can mimic just about any accent and I love to play golf.

2. Who is your favorite literary villain and why?
Dash Chalmers from Kensy and Max. He is pure evil but also a bit of an enigma.

3. You’re hosting a literary dinner party, which five authors would you invite? (live or dead)
Enid Blyton, Beverly Cleary, Roald Dahl, Harper Lee and Colin Thiele (I have questions for all of them).

4. Which literary invention do you wish was real?
The RUOK 5.0 from the Kensy and Max series – a high-tech portable diagnostic medical scanner which can be used to identify almost any health issue on the spot.

5. What are five words that describe your writing process?
Thoughtful, creative, dedicated, organized and speedy.

6. Which are the five words you would like to be remembered by as a writer?
Entertaining, creative, heartfelt, well researched and fun.

8. Grab the nearest book, open it to page 22 and look for the second word in the first sentence. Now, write a line that starts with that word. (Please include the name of the book!)
Was that you I saw Ronald, climbing out of Mrs Best’s kitchen window last night?
The book I used was Alice-Miranda in Egypt (#20 in the series)

9. If you could ask one author one question, what would the question be and who would you ask?
To Enid Blyton: ‘What compelled you to write over 700 books?’ 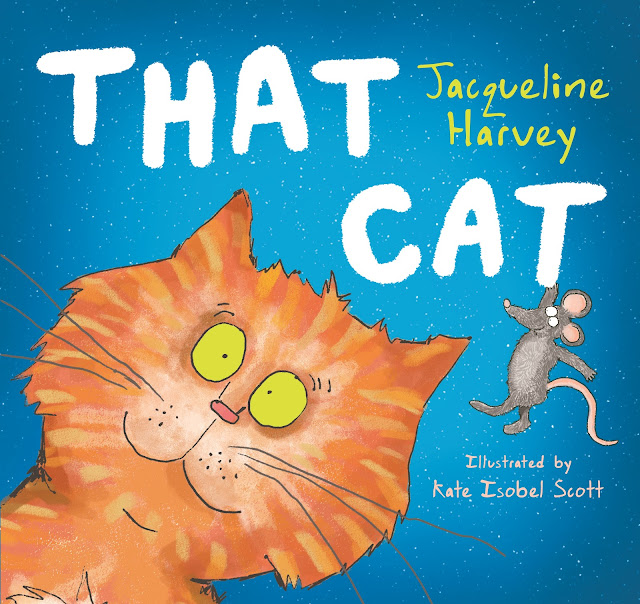 Jacqueline Harvey worked in schools for many years but has had a passion for storytelling since she was a child. She is the author of the popular Alice-Miranda, Clementine Rose and Kensy and Max series, which have sold over one million copies in Australia alone. She is currently working on a new series, Willa and Woofwhich will be released in July 2022. That Cat is the 49th book and the second picture book she’s written. For more information, see www.jacquelineharvey.com.au. You can also read more about Jacqueline and our reviews of just some of her books here.