Today is World Bicycle Day. Yes, it’s a thing! And if you love(d) your bike the way I loved mine (Treated it like a pony, Ed.) then this will make you want to climb back onto the saddle and whizz down the street.

Watching children roleplay is remarkable: their active imaginations can bring anything to ‘life’. They make the otherwise inanimate – a teddy bear, doll or toy – move and talk, imbuing each with personality and motivations. Through this type of play, children create lovely stories and form strong bonds with their beloved possessions.

Child psychologists have known for quite some time that children in western cultures intuitively anthropomorphise objects and look at them almost as if they have feelings. Kids understand that these objects are not alive, but they believe in them – and behave toward them – as if they are.

As a child, my favorite ‘toy’ was my bicycle, and I believed it had a life force. I loved it like a best friend; I cherished it, cleaned it, rode it everywhere I could and even wept uncontrollably when it was stolen. I was thrilled and grateful when the bicycle was found and returned.

Years later, I wrote a story about my bike for a high school assignment. The story’s title was My Green Bike – The Good, Bad and the Ugly. It chronicled the lifecycle of my childhood bicycle, from when I learned to ride, to being thrown around by neighbor bullies, to becoming a part of my exercise regime, to its theft and return, to eventual abandonment in the backyard shed after I grew too big for it. [As an
aside, I highly recommend writers mine their creative writing assignments
from  school for inspiration, as we tend
not to filter our creativity when we’re young]. 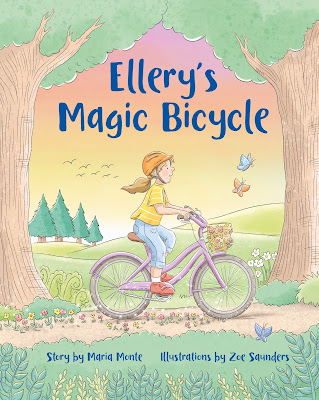 That high school assignment inspired my picture book, Ellery’s Magic Bicycle. The story’s goal in the picture book was to capture that bond between children and their bicycles. It so happens that I am writing this post to celebrate World Bicycle Day on 3 June. The theme for this day can be summarised – in part – as ‘the uniqueness, versatility, and longevity of the bicycle’.

Bicycles are an indelible part of our childhoods, and I hope that when parents read this book with their children, they remember their long-gone bicycles with fondness. I also hope that kids look at their bicycles in a new light.

So in honor of World Bicycle Day, take the time to enjoy a bike ride with your family soon!

Maria Monte lives in Melbourne with her young son. Her time is divided between family, a fulfilling role in communications, and publishing her children’s books. She enjoys mochas, watching comedies, and losing herself in wiki rabbit holes. Maria’s latest heart-warming picture book Ellery’s Magic Bicycle (illustrated by Zoe Saunders), was released in May 2022 through Bonny Books. Her debut picture book, Eve’s Ducklings, was released in July 2021.

Connect with Maria on Facebook,
Instagram and
Twitteror you can enjoy her musings on parenthood at her blog.