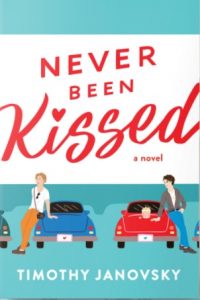 Dear (never-been-quite-over-you) Crush,
It’s been a few years since we were together, but I can’t stop thinking about the time we almost…

Wren Roland has never been kissed, but he wants that movie-perfect ending more than anything. Feeling nostalgic on the eve of his birthday, he sends emails to all the boys he (ahem) loved before he came out. Morning brings the inevitable Oh God What Did I Do?, but he brushes that panic aside. Why stress about it? None of his could-have-beens are actually going to read the emails, much less respond. Right?

Enter Derick Haverford, Wren’s #1 pre-coming-out-crush and his drive-in theater’s new social media intern. Everyone claims he’s coasting on cinematic good looks and his father’s connections, but Wren has always known there’s much more to Derick than meets the eye. Too bad he doesn’t feel the same way about the infamous almost-kiss that once rocked Wren’s world.

Whatever. Wren’s no longer a closed teenager; he can survive this. But as their hazy summer becomes consumed with a special project that may just save the struggling drive-in for good, Wren and Derick are drawn ever-closer…and maybe, finally, Wren’s dream of a perfect-kiss-before-the-credits is within reach.

While the blurb suggests similarities with To All the Boys I’ve Loved Before, the story itself is very different. Yes, it does use the device of correspondence to previous crushes but that’s about it. For starters, the main characters are all in their early 20s (Wren turns 22 at the very start of the novel).

Wren has just graduated college with a degree in film studies. For the past 8 years he’s been working at Wiley’s Drive-In every summer and this year, he will be a Manager. Wiley’s is dying; With the popularity of streaming services and other media so easily available, people aren’t going to drive-ins all that much anymore. Still, he hopes Wiley’s will survive.

Wren has no set plan for his career; he will take the summer to work things out. There are things he thinks perhaps he should be looking at but he’s conflicted by other things closer to his heart.

Wren and his besties and roommates, Mateo and Avery (who are also queer), are all working at the drive-in this summer. Avery has worked there before but Mateo only took the job when his summer repertory theater gig didn’t pan out. During the course of the book Wren has to struggle with being both boss and friend to Mateo, who is not very good at his job.

I shut the cash till and check on Mateo, who’s working across from me.

From his overexaggerated posture, I can tell he’s faking assurance in everything I’ve shown him. A car peels away from his side. He blunders with the cash stack and ends up drenching us both in a shower of singles. It’s like we’re the world’s least-deserving Chippendales dancers.

Personally, Wren feels left behind in terms of his romantic experience. He’s come out as gay but wonders whether this is the most appropriate label – though he’s yet to express that anywhere but internally. He dreams of having an epic first kiss; it plays like a movie in his mind and it is as cinematic as most romantic films. Wren’s love of the medium goes far beyond “movie buff”. He’s had 4 “almost kisses” but for one reason or another, they’ve never happened. After he drunkenly sends emails to all 4 people on his birthday, he’s (of course) mortified. 3 of the 4 potential recipient are never remotely likely as a love interest for Wren. There is only ever 1: Derick Haverford. Derick, much to Wren’s horror, responds to the email and things only get worse for Wren when he finds out that Derick is the new social media intern at Wiley’s for the summer.

Neither Derick nor Wren were out in high school when the “almost-kiss” happened and Wren is still nursing hurt at the way Derick ghosted on him in freshman year of college. They had been best friends but suddenly Wren was not included and Derick joined a frat and started hanging out with jocks. Things are different now of course. Both men have finished college; Derick came out during his studies and is comfortable in his sexuality. When Derick tells Wren he didn’t think of him “that way” in high school, Wren thinks there’s no chance but readers know better. Wren was sometimes a little too clueless.

Wren has an opportunity to be a guest on a movie podcast with a large and avid following and he has long held a dream of viewing a film made in 1978 but which was never released, ‘Chumpin’ At The Bit’, and meeting its reclusive local director, Alice Kelly. The zombie movie is described as having “a grindhouse hook, so that B-movie drive-in appeal, but arthouse sensibilities”. Wren did his capstone project on Alice Kelly and Chompin’ At The Bit. Only a few people have ever seen the film and Alice controls access to the only known print available. He wonders if the rumoured queer subtext in the film is real or not. He wonders what is the real story of why the movie was pulled from release and Alice withdrew from her career and society.

The original official premiere of Chompin’ At The Bit was to be at Wiley’s Drive-In so naturally the podcast’s interest in Wren and Wren’s coincidence and he decides to try again to contact Alice using a more direct approach this time. Can the “premiere that never was” become the premiere that saves Wiley’s?

Alice is a wonderful character, crotchety, cutting, romantic and lonely. She’s also trying to sell her house and nobody wants to buy it because it’s a dump. So she says she’ll “strongly consider” giving Wren access to the film if he helps her (read that as Alice will supervise only) fix the house up for sale.

As Wren and Derick put their past behind them and decide to try and be friends again, Wren ropes Derick into the project. Wren is a thinker and dreamer. Derick is more physical and he’s very good at picking things up from YouTube videos. Over the course of the book, they become good friends with Alice. The 3 of them change each other’s lives in many ways.

Derick loves media and photography but his father, the wealthy owner of a bus company, is controlling and not supportive of Derick’s personal aspirations. Wren gets a closer look at Derick’s family dynamics and realises that Derick has things going on too.

The men grow close and then closer over the summer. It’s clear early on, even though the story is only from Wren’s first person perspective, that Derick is interested in pursuing a romantic relationship with Wren but Wren is gun-shy and scared. Still, they work things out with the power of using their words.

My biggest issue with the story was the cognitive dissonance I had with Wren and, to a lesser extent, Derick. They were college graduates but they seemed so very young. Some of their actions and reactions felt more suited to a much younger character – say 18. There were things that Wren did not know – had never even heard of – which I found it difficult to believe could be true, particularly given his friendship group. However, at other times, Wren and Derick acted in age-appropriate ways and the setting of the story was clearly adult. The book reads like a YA. I’m not an expert in YA but I thought usually the main characters in a YA are under 18. It’s a thing I stumbled up against again and again over the course of the story.

Some of this can be explained by Wren’s lack of romantic experience and not having gone through some of the “rites of passage” perhaps a straight or out queer person would have years earlier but even my understanding of that concept wasn’t enough to get me over the jarring effect of the apparent mismatch between age and actions at times.

There is a sweetness to the story. Yes, it’s kisses only but I don’t mean in terms of heat level. There’s something… wholesome about it. It’s not religious or preachy or anything like that but there’s a kind of old-fashioned, small town, summery idyll vibe to the book. It nonetheless combines modern sensibilities, queer inclusion and social media. Each chapter includes some Instagram or Twitter interactions between various of the characters, most often centerd around Derick’s efforts to build Wiley’s brand.

The writing was polished and accessible, with Wren’s personality coming through strongly. I chuckled a few times and held my breath a little at others – although a thing I feared had been foreshadowed thankfully did not happen.

I identified with Wren’s “movie in his mind” dreams and his love of Coke:

“Is Pepsi okay?” he asks. I internally cringe, but externally say, “Water will be fine. Thanks.” I’d rather crash than drink the devil’s syrup.

I enjoyed the camaraderie of the “3Beegees”, I loved everything Alice and I believed in the connection between Derick and Wren. There were some disconnects regarding their respective family relationships, questions I had and some things which seemed a bit too opaque for me to grasp and that cognitive dissonance I mentioned earlier, but overall, I found Never Been Kissed pretty charming.

Kaetrin started reading romance as a teen and then took a long break, detouring into fantasy and thrillers. She returned to romance in 2008 and has been blogging since 2010. She reads contemporary, historical, a little paranormal, urban fantasy and romantic suspense, as well as erotic romance and more recently, new adult. She loves angsty books, funny books, long books and short books. The only mandatory thing is the HEA. Favorite authors include Mary Balogh, Susanna Kearsley, Joanna Bourne, Tammara Webber, Kristen Ashley, Shannon Stacey, Sarah Mayberry, JD Robb/Nora Roberts, KA Mitchell, Marie Sexton, Patricia Briggs, Ilona Andrews, just to name a few. You can find her on Twitter: @kaetrin67.