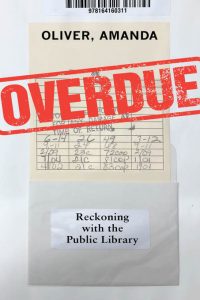 When Amanda Oliver began working as a school librarian, fueled by a lifelong love of books and a desire to help, she felt qualified for the job. What she learned was that librarians are expected to serve as mediators and mental-health-crisis support professionals, customer service reps and administrators of overdose treatment, fierce loyalists to institutionalized mythology and enforced silence, and arms of state surveillance.

Based on firsthand experiences from six years of professional work as a librarian in high-poverty neighborhoods of Washington, DC, as well as interviews and research, Overdue begins with Oliver’s first day at Northwest One, the DC Public Library branch where she would ultimately end her library career.

Through her experience at this branch, Oliver highlights the national problems that have existed in libraries since they were founded, troublingly at odds with the commonization of the library as a shining beacon of equality: racism, segregation, and economic discrimination. These fundamental American problems manifest today as police violence, the opioid epidemic, widespread inaccessibility of affordable housing, and a lack of mental health care nationwide—all of which come to a head in public library spaces.

Can public librarians continue to play the many roles they are tasked with? Can American society sustain one of its most noble institutions?

Libraries will not save us, but Oliver helps us imagine what might be possible if we stop expecting them to.

Well I’ve just had my childhood fantasy of being a librarian shattered. “Overdue” by Amanda Oliver is the tale of her time spent as a school and then public librarian which ended with her leaving and taking a case of PTSD with her. It’s a sad and sobering look at the state of society, libraries, and librarians.

The author mentions librarians who have been murdered on the job, the sexual harassment and being ruined by her male colleagues to not go to a certain section of their library alone, having her clothesed from them so many times due to bedbugs being found in returned items, empathy fatigue, how torn she was at their location having a police officer on site and how relieved she was that the officer was there …

I still love my local library system and have never (knock wood) seen anything like she describes but I hate to think of people who love books and are just trying to get them (and the other wonderful things libraries have for patrons to use) into the hands of library users and facing all this. B-