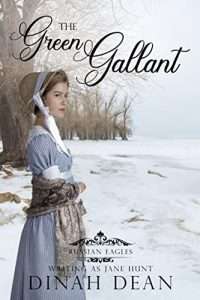 Brilliant soldier Major Vladimir Karachev, of the Imperial Russian Army, is fighting for his life. Stuck serving under an incompentent colonel and defending his homeland against the mighty and seemingly unstoppable French under Emperor Bonaparte, Vladimir must use all his wits to survive.

When the Allied forces chase the enemy into France, Vladimir finds a beautiful woman hiding in a closet! Blanche de Marain is caught in her late husband’s house after she returns for a picture of her late husband and is left behind. A night of passion cements Blanche and Vladimir’s instant connection, and Vladimir sends her with nuns to safety in Paris.

It’s a long and complicated war for Vladimir, made worse by uncertainty. Did Blanche reach Paris safely? Will he reach Paris intact, and find her if he does? Little does he know that winning peace and reaching Paris will be the beginning, not the end, of his challenges.

I was continuing to read this series in order of the timing of the events in the books rather than the date when Dinah Dean wrote them but since this one has now been released, let’s post this review next. I had to double check when this book was written and was amazed when I realized it was written earlier than almost all the other books in the “Russian” series. Why was I amazed? Because Dean must have already plotted out the books yet to be written as events from them are referenced already in this book.

Before I get going, I should mention that this book is historical fiction rather than a historical romance. There is a slight romantic relationship in it but the overwhelming majority of the story concerns the actions of a particular Russian line regiment during the closing months of the fighting in 1814 and the experiences of several of the officers while in Paris as the peace treaty ending Napoleon’s reign is worked out. It’s actually a fascinating “you are there” examination of this regiment fighting its way from Leipzig across Germany and into France before finally reaching Paris then discovering the (in some cases sadly neglected overgrown, and filthy) tourist sights there. But it is not a romance book.

Major Count Vladimir Karachev is disgusted with the buffoon now commanding the Volkhovskys after the dreadful wound suffered by their previous (and much loved) Colonel Prince Nikolai. The Idiot does nothing – not even the bare minimum – his position requires but leaves it all to Vladimir and then berates and belittles him. The men know who really does all the work and, along with the officers, wholeheartedly support Vladimir.

On the way into France, they spend the night in a French village where Vladimir meets the owner of the house – a beautiful Frenchwoman who matter of fact accepts Vladimir’s offer of protection. He does make absolutely sure that she is willing and offers her several opportunities to decline sleeping with him and still have his offer to protect her until she can be transferred across French lines. They both are both interested in a night of comfort and Vladimir makes sure the night is sublime for them both.

When the Volkhovskys finally reach Paris – after The Idiot continues his idiocy – Vladimir and his ensign Boris (a totally delightful young man whom I hope to see more of in this series) discover that Vladimir’s older brother – who has been traveling across Europe on hush -hush assignments – is there and Vassily soon becomes their introduction to the (once grand) sights of the city. It’s startling to read about the Revolutionary damage that had been inflicted on Notre Dame or Versailles and compare it with how these and other places have now been (or are being – in the case of Notre Dame) repaired.

But what about the Frenchwoman, Marquise Blanche? Well there’s a subplot about her relationship with Vladimir but Dinah Dean makes sure that we know early on that this will not end in a HEA romance. There I’ve said it but if it’s a spoiler, it’s one I feel that readers ought to know before deciding whether or not to buy this and read it.

It’s a good book and I enjoyed it but this is more because of the comradly relationship between Vladimir, Boris, Vassily, and later Prince Nikolai. Vassily also has a not-really relationship with another young Frenchwoman that people might quibble about but Vassily sees a young woman whose life has been blighted and who desperately wants only one thing and then he sets out to help her obtain this. It’s all frank and above board and I found myself quietly admiring what he decides to offer her even if, at times, he has a slightly patronizing view of her.

Dean did – so far – a great job of recapping from previous books what is needed to know and be able to follow the lives of these characters (most of whom know or know of each other). So readers who are interested in what I’ve described, go for it. It’s an interesting bromance and taught me a lot about the events described but remember it’s also not a romance. B