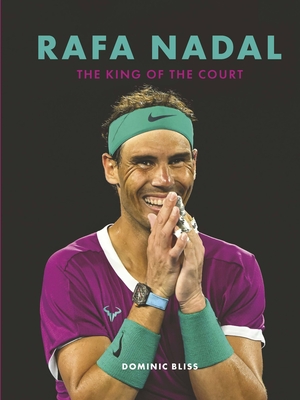 This book is the complete guide to one of the greatest tennis players of the 21st century, winner of 21 grand slam men’s singles titles, and undisputed King of the tennis court, Spain’s raging bull, Rafael Nadal.

This fully illustrated biography charts his journey to the top, from his early days being coached by his uncle Toni in Mallorca and dreaming of being a professional footballer, through his early tournament career, turning professional, his first senior ATP win, first grand slam win at Roland Garros, first Wimbledon win and first Olympic gold medal and record breaking 21st Grand Slam win.

Written by Dominic Bliss, a veteran tennis journalist who has followed Nadal’s career closely both on and off the court, this biography tracks Rafa’s journey from painfully shy pin-up boy to senior statesman on the ATP Tour.

Structured around 10 key matches in his long career, it takes readers from his first national championship win at age 14 (when he played with the pain of a broken finger on his racquet hand) through to his 21st Grand Slam title in January 2022, where he came back from two sets down to defeat Daniil Medvedev in an epic 5-set match.

From his need for water bottles to be arranged ‘a certain way’ on the court, to his charity work raising $17 million to help the Red Cross’ efforts to support those impacted by the coronavirus pandemic, this book examines every angle of Rafa as a human being, a model athlete, a serial winner. This definitive work on one of tennis’ all time greats is not to be missed!

I KNOW IT HAS THE PUBLICATION DATE OF JULY 5 2022, BUT THE BOOK IS ALREADY AVAILABLE ON KINDLE AND THATS THE EDITION I BOUGHT
Review:

So I would say that overall this more of a disappointing read for me. If this book will be your first introduction to Rafa Nadal’s life and his achievements on the tennis field, then I would recommend it. But I already read many articles and three books about this man (in addition to watching him playing of course) and I am sorry, this book for me did not contain any new insights about him and his views.

It is a nice, sympathetic recap, but nothing more for any seasoned fan IMO. I bought it because I wanted a biography which would be complete as of today. Rafa is still competing so theoretically he can add a few pages to his awesome career run, but I wanted something more chronologically complete than his auto biography done in 2011. And the cover picture promised some mention of his win at the AO tournament this year and it does mention the win, although very briefly, so that was something I liked.

I was worried about how the author would be discussing Rafa’s pre match rituals because goodness gracious I have heard enough annoying comments by commentators over the years (and I became a passionate fan of tennis in general and of this sportsman only four or five years ago and man I already heard enough unkind comments). It was fine, I should not have worried, the author talks about rituals being superstitions and part of his routine that can help him put his mind in the right mindset and he quoted Rafa:

“I’m not superstitious, otherwise I would change the rituals with each defeat. I’m not even a slave to routine. What people call tics or rituals are how I put my head in order, because my head is normally very messy. It’s a way to concentrate and silence the voices within. So I don’t have to listen to the voice that tells me I’m going to lose; nor to the voice that, even more dangerously, tells me I’m going to win.” This was Rafa in a recent interview with Italian newspaper Corriere dello Sport, explaining for perhaps the thousandth time why he observes so many strictly defined rituals before and during his matches.”

Bottom line it was not unkind and I was glad for that as a fan.

Now I am always confused about how I should be reviewing any biography of any famous or not very famous person in any field. At least as a fan I can say that no significant piece of information is missing from this book. The writing is engaging enough, but I guess to me it could have been done more in depth. The author lists a bibliography at the end, he also mentions that he spoke to Rafa in person (not counting post match press conferences) four times over the years of following his career. I wonder if he would have had a chance to talk to Rafa more, maybe book would have had more interesting details? Hard to say.

Sirius started reading books when she was four and reading and discussing books is still her favorite hobby. One of her very favorite gay romances is Tamara Allen’s Whistling in the Dark. In fact, she loves every book written by Tamara Allen. Amongst her other favorite romance writers are Ginn Hale, Nicole Kimberling, Josephine Myles, Taylor V. Donovan and many others. Sirius’ other favorite genres are scifi, mystery and Russian classics. Sirius also loves traveling, watching movies and long slow walks.